To be truthful with you, as a traditional pharmacist I must tell you that the evidence that is available ‘in the literature’ leads me to say that it shouldn’t work in the real world – in people who are taking supplements they buy at the health food stores.

BUT – personal observations and analysis of hard data contained in graphs like the two I’ve pasted in below lead me to the conclusion that there might be some truth in this claim if the ginger is properly prepared and taken at a high enough dose. 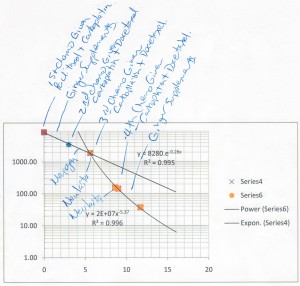 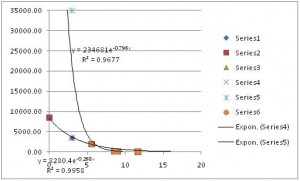 So, please keep reading – I have a story to tell you that I think you’ll find worth thinking about … and a recipe for a simple ginger drink that you can make at home and that you or somebody you care about might find useful. (candied ginger or ginger beer are NOT going to get the job done… and I doubt that the capsules you buy at the healthfood stores will either.)

The story is a little bit long, but I think it’s worth the effort – and I hope you will too.

In April of last year a family member was diagnosed with advanced Ovarian Cancer.

The e-mail suggestions from friends and family started flowing in from all over the world.

One of them had excerpts from an article that a friend had seen on one of the mainstream news outlets and online – and the article had a title something like ‘Ginger – A treatment for Ovarian Cancer’ or ‘Ginger Kills Ovarian Cancer’. Something like that.

Now – despite the name of this website – I’m an extremely skeptical pharmacist. But, the situation was grim and getting grimmer every day – and the request was made. So, I figured I’d take a look at the source of this rumor and decide for myself what the heck they were talking about.

I eventually tracked down the journal article that had created such an furor.

It was titled Ginger inhibits cell growth and modulates angiogenic factors in ovarian cancer cells, and it was written and published in 2007 in the journal BMC Complementary and Alternative Medicine  (2007 Issue 7, pages 44-53) by a team of researchers (J. Rhode, S. Fogoros, S. Zick, H. Wahl. K. A. Griffith, J. Huang, J. R. Liu). You can get a free pdf version of it at http://www.biomedcentral.com/content/pdf/1472-6882-7-44.pdf.

Anyway, I read it… several times. And couldn’t find any real flaws in what this team had done. In fact, I was quite impressed – and I pondered their claims for many hours.

It looks like one of the essential oils contained in ginger root is capable of slowing the growth of ovarian cancer, and maybe even convincing it to kill itself.

But – the pharmacist asks – can you safely get enough of that oil into the human body by taking the capsules and tablets they’re selling at all the health food stores? (Unfortunately, the study had been done in the lab, not in people.)

I took a trip to a couple of the health food stores and reviewed the products that were available. Then I started looking to see if anyone had studied whether the essential oils could get into a person in any significant quantity.

That article – written by S. M. Zick, et. al. and titled Pharmacokinetics of 6-Gingerol, 8-Gingerol, 10-Gingerol, and 6-Shogaol and Conjugate Metabolites in Healthy Human Subjects – told me that it was unlikely that enough essential oil could get into a person who took ginger supplement capsules. There simply isn’t enough oil in the capsules, and the liver changes what is available to another chemical compound before it can travel to the rest of the body.

By this time I was totally hooked on this question. Night and day I read blogs, online articles, and mainstream and alternative health information from more places than I would spend the space to list. I traveled to libraries all over the state to read textbooks and references about Ginger, its chemical properties, it’s production, and its historical use as a medicine.

And then, after I’d read everything I could get my hands on, I found myself staring at the roof in the middle of the night and telling myself – ‘what the heck, it might help – I don’t know exactly how it would work – but there might be something to it’.

You see – the ginger that we eat is a family of plant species that’s been used by mankind as a medicine and food supplement for so long that you can’t find it in the wild anymore unless someone planted it there. It’s related to tumeric and contains an amazing array of esential oils, flavanoids, and other chemicals – some of which are similar in structure to curcumin. Although it’s currently used as an anti-nausea medication, there are reports of anti-inflammatory effects and its use for cancer treatment.

Time for That Crazy Pharmacist to get to work maximizing the probability that it would work if it could work.

The result of that work turned out to be a collaborative effort between myself and the person who would have to take whatever concoction I came up with.

I provided the methods for processing the Ginger root. She provided a way to make my product palatable and easy to take.

The resulting ginger drink is actually pretty easy to make, and tastes OK too. (You’ll find the recipe posted on this website under ‘Catherine’s Potent Ginger Concoction’ – and it’s available for free.)

Although I have continually worked to discount the influence of the Ginger Drink on this patient’s clinical course, I can also make a strong case for the belief that it had a profound effect on her particular tumors – perhaps working with the chemo treatments to increase tumor kill.

What caused me to convert from a non-believer to a person who now believes it is highly probable that using the ginger drink can positively affect an ovarian cancer patient’s clinical outcomes?

Well, before I was a pharmacist I worked for a long time in semiconductor engineering disciplines using statistical methods to figure out what was wrong with computer chips and how long they would stay running in computers, cardiac pacemakers, etc… So it was only natural for me to pass the time and try to interject some control into the situation by charting and trying to predict the CA125 levels that were being used to track the effectiveness of my family member’s chemo regimen.

The graphs you saw at the beginning of this post are examples of what I’m talking about… In fact, they’re real data for this real patient.

The graphs are a little hard to explain… They are plots of the patient’s CA125 levels across time, and are believed to roughly show how fast the tumors are being killed.

The most important thing to note is that there are actually two different ‘curves’ – or continuous lines – on them, and that the curves changed suddenly. This should not happen unless something important changed.

The change in the curves occured at the point that the patient started taking the ginger supplement we designed. The patient also started getting Neulasta injections in the same timeframe. The result could be from either event.. or both… Neither is supposed to have any effect on these curves.

The kill rate for the tumors appears to have increased abruptly. This increase in kill rate – if it really occured – enabled the patient to reach the goal that they use to decide whether or not the patient will get surgery. Without the change the patient would not have reached that goal.

When they operated on her the team expected to have to take some part of her other internal organs out (e.g. intestines, lymph nodes, etc…). When they got in there and looked around they couldn’t find  the other tumors they expected to find. What they found was – as the surgeon said – ‘The best of all possible outcomes considering the circumstances’.

If it works it probably doesn’t work the way the lab experiment did… maybe bioflavanoids are the cause of the effect.

You can find out more about bioflavanoids at this website. – http://lpi.oregonstate.edu/. (Linus Pauling Institute)

Wikipedia has a good article on them also.

Again, I do not understand why it works – if it works – and because I don’t understand what is going on I recommend that you shouldn’t change the recipe for ‘Catherine’s Potent Ginger Concoction’ very much if you are going to try to use it. (Who knows what chemistry is going on inside that mix.)

Please get copies of these articles and the recipe for ‘Catherine’s Potent Ginger Concoction’ – or print out a copy of this blog note – and talk to your Physician about them and whether this is something your physician thinks would be safe for you to try.

As always, Do NOT start taking Ginger supplentation, any other herbal or ‘natural’ product, or any medication without talking to your Physician and getting his OK.

I’m a pharmacist – not a doctor – and I am providing information that I think is important for you to talk to your doctor about.

I am NOT recommending that you take these supplements or medications without your physicians’ OK!!!

Be Safe – I’m telling you what my observati0ns and opinions are based on what I’ve been able to dig up.

oh yeah…. in case you didn’t know – et. al. is used by geeks who read journal articles when they’re too lazy to write out the names of all the authors who were listed for the article they’re referencing. don’t be intimidated. you have all the information you need to get a copy of the article so that your doctor or other health care provider can read it. and, when you get a copy don’t let the techno-jargon intimidate you. you don’t have to know it. your doctor will know how to read and interpret it. the most important information is usually contained in a summary section at the first of the article anyway.

8 thoughts on “Can Ginger Cure or Slow Down Ovarian and other Cancers?”